This is the most significant advance in my practice in over a decade.
And I’m introducing it because of the life-changing results it has made possible over many years, in the hands of its developers.

Of the THOUSANDS of testing and treatment options out there, why have I chosen this one so emphatically?  Quite simply, because it works.

In 2013 someone very dear to me was knocked sideways by a physical and emotional trauma that she could not come to terms with.  As the months went by, the unrelenting stress only increased and as it did, I could almost predict where it was heading.

7 months later, her health collapsed, a very serious condition was diagnosed and we began the battle to overcome difficult odds.  The battle was not just a physical one. It was also an emotional, and therefore neurological one.  The trauma had jammed her autonomic nervous system into fight or flight and there was no time given for recovery.

Field Control Therapy alone was insufficient.  Why?  Because diet and emf avoidance were not easily adhered to.  So, GcMAF was used to get the immune system back on its feet, and a surgery was reluctantly performed to remove the offending portion of colon.

I knew she was still stuck in fight or flight, and now had fewer reserves.  If I could JUST get her autonomic nervous system out of stress, there would be plenty of energy to direct at recovery.  Progress could accelerate immeasurably!

Then, as if by magic, my dear friend Liz introduced me to an evening lecture focusing on cellular metabolism and how to regulate the fight or flight versus rest and recovery aspects of the autonomic nervous system.

These of course were the two areas I knew I had to influence.  But not just in this case.

From the lecture, it became abundantly clear that the VAST majority of those seeking medical attention are in the same situation.

The solution is to monitor and correct the fight or flight response in the autonomic nervous system.  Because THAT is how we see what is happening at the intra-cellular level.  The level of the mitochondria.

So how do we do that?

Using a proprietary Heart Rate Variability technology, it is possible to obtain more valuable data in a half hour consultation, than any technology to date.  It is not the quantity of the data that is important.  It is the RELEVANCE and the QUALITY that is everything.

In a single snap-shot we can see the pulse, the variability or deviation of that pulse, the number of ectopic beats or ‘extra cystols’ and a list of figures that determine the total power, the level of stress and the degree to which the autonomic nervous system is coping. 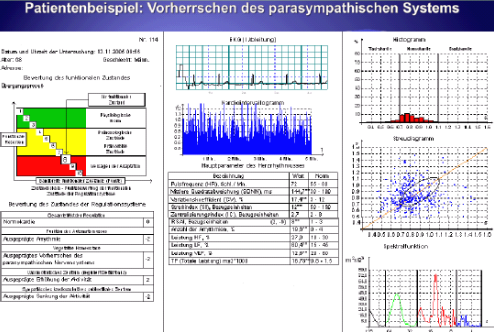 I shall map this out for you in a future article.  But for now it is sufficient to say that these parameters determine your vitality and capacity to recover. The HRV is not a diagnostic tool.  It is a means of monitoring the balance of the autonomic nervous system and its ability to adapt to stress.

There is no attempt to treat symptoms, either with drugs or supplements.  As I have always said, a pill for every ill is entirely ineffective and frequently counter-productive.  Instead, a precise nutrient complexes is employed and used in specific ratios according to the individual’s test results from the Heart Rate Variability algorithm.

These go to work at the mitochondrial level assisting the body to make a systemic, cellular recovery.  In just 2 months a follow up HRV test will show the improvements and steer adjustments until a person is in the green zone with correct balance of sympathetic and parasympathetic nervous control and the associated ability to adapt to stress.

Whether you are suffering from digestive disorders, heart issues, brain or nervous system illness, structural problems or chronic fatigue, proper mitochondrial performance and autonomic nervous system control are imperative for the fastest possible recovery.  And that is why I am making this available to you.

This is a stand alone therapy (or insurance policy) for those not able to follow my recommendation of combining it with Field Control Therapy.